The Gettysburg Address casts an understandably long shadow on Lincoln’s other oratory triumphs.  It emerged from one of the most horrific battles in our history – 8,000 soldiers in a single battlefield.

The dedication was surprisingly brief —  a mere 272 words.  And the great art of  Lincoln’s address is that it does not mention Gettysburg, slavery, or the Union.  It was an address that transcended the moment and became less of an epitaph and more of a hallowed symbol for “a new birth of freedom.”

But many believe, including Lincoln, that the speech he gave on a rainy day in March 1865, was his greatest triumph.

Frederick Douglass, the great American social reformer, abolitionist and orator, wrote that “the address sounded more like a sermon than a state paper.” Historians like Ronald White Jr.  have called the Second Inaugural,  Lincoln’s greatest speech. 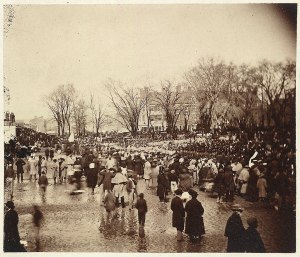 March 4 dawned with unrelenting rain.  It was as if the tears of years of war had poured down on Washington. The deluge had turned the streets into an oozing soft mud, the residents called “black plaster.” A thick layer of fog hung over the city and a crowd of nearly 40,000 people began to fill the streets.

Noah Brooks, Lincoln’s friend and correspondent for the Sacramento Daily Union wrote, “Flocks of women streamed around the Capitol, in most wretched plight; crinoline was smashed, skirts bedaubed, and moiré antique, velvet, laces and such dry goods were streaked with mud from end to end.”

Just before noon, the rain suddenly ceased and Lincoln was escorted through a corridor and to a temporary wood platform that extended from the east front of the Capitol.

The Second Inaugural Address would be the only occasion on which

Lincoln was photographed giving a speech.   It is a haunting photograph because up behind the right buttress stood a hatless man who’s name is forever linked to Lincoln’s  — John Wilkes Booth.

41 days later, Lincoln would lie dying in a small room at the Peterson House across the street from Ford’s Theater —  felled by a single shot from Booth’s Derringer pistol.

Brooks reported that when Lincoln was introduced “A roar of applause shook the air and again, and again repeated.” As Lincoln began to speak, the sun broke through the clouds.  “Just at that moment the sun, which had been obscured all day, burst forth in its unclouded meridian splendor, and flooded the spectacle with glory and with light.”

Chief Justice and long-time Lincoln rival, Salmon Chase saw it in the vernacular  of a politician as  “an auspicious omen of the dispersion of clouds of war and the restoration of the clear sun light of prosperous peace.”

In his clear, high-pitched voice that reached the impossible edges of the crowd, Lincoln began to recite one of shortest inaugural addresses in American history — 703 words.

“As this second appearing, to take the oath of the presidential office, there is less an occasion for an extended address than there was at the first.  Then a statement, somewhat in detail, of a course to be pursued, seemed fitting and proper. Now, at the expiration of four years, during which public declarations have been constantly called forth on every point and phase of the great contest which still absorbs the attention, and engrosses the energies of the nation, little that is new could be presented.  The progress of our arms, upon which all else chiefly depends, is as well known the public as to myself; and it is, I trust reasonably satisfactory and encouraging to all.  With high hope for the future, no prediction in regard to it is ventured.”

Unlike the Gettysburg’s Address or his first Inaugural, there are no rhetorical flourishes, no phrasings or words that would seemingly resonate with the passions of his audience.  As Ronald White has aptly written,  “Lincoln’s beginning seems, at first glance, to undercut the grand opportunity of a second inaugural address.”

So why did Lincoln compose this apparently subdued opening?

I believe that it was an extension of Lincoln’s understanding of consequences.  He could have easily ignited the passions of the crowd by proclaiming near victory for the Union.  In fact, Lincoln says “no prediction in regard to it is ventured.”

As the audience was listening to his first words, Lincoln saw his speech as a whole.  It wasn’t a victory speech, it was an a providential plea for reconciliation and healing.

White continues, “Lincoln’s apparently flat recital of chronology was actually preparing the ground for a profound conversation about historical causation. He had been carrying on this conversation in private musings, in interviews at the White House, and in letters… Lincoln would ask his audience to think with him about the cause and meaning of war.”

It was a kind of elaborate game of chess.  Lincoln was fond of playing chess and his contemporaries commented that he usually acted cautiously upon the defensive until the game reached a stage where aggressive movements were clearly justified.

Flourish can be folly without a clear sense of an ultimate goal.

“On the occasion corresponding this four years ago all thoughts were anxiously directed to an impending civil war.  All dreaded it, all sought to avoid it.  While the inaugural address was being delivered from this place, devoted to saving the Union without war, insurgent agents were in the city seeking to destroy it without war and divide effects by negotiation.  Both parties deprecated war, but one of the would make war rather than let the nation survive, and the other would accept war rather than let it perish and the war came.”

One of Lincoln’s favorite rhetorical devices is alliteration.  He used the letter “d” as the first letter in eight key words as shown above.

Lincoln lived in an age of oratory and he crafted his speeches for the immediacy of the ear.  His alliteration — spaced as it is — is less about having the audience recognize the rhetorical technique and more about creating cadence.

The grander purpose of the paragraph is about the historical roots of the war.  Lincoln believed that a profound way to persuade people was to illustrate historical precedent.

This is a paragraph of antithesis.  Lincoln is laying the foundation for unity by underscoring the disunity. “Both parties deprecated war, but one of them would make war rather than let the nation survive.”

Brooks reported that there was applause during this part of the speech but that Lincoln paused and then said in a sobering voice said, “and the war came.”

Brick by verbal brick, Lincoln has told the audience what he won’t do in his speech in the first paragraph.  And in the second, he reminds the audience of the roots of the great conflict.

Chances are I have taxed the reader’s eyes with over a 1000 words —  300 more than Lincoln’s actual address.  So I will respectfully continue with Part 2 next week.  My thanks to Ronald C. White, Jr., Garry Wills, and Doris Kerns Goodwin for their Lincoln scholarship.