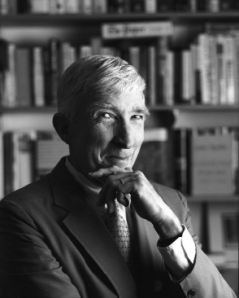 In late November 1961, a 29-year-old John Updike finished the draft of his short story, In Football Season.

Since we share equally aquiline noses, this story has always been among my favorites. It is a story that elevates the one sense that seems to have a direct line to long buried or forgotten memories.

Here are the opening sentences:

“Do you remember a fragrance girls acquire in autumn?

As you walk beside them after school, they tighten their arms about their books and bend their heads forward to give a more flattering attention to your words, and in the little intimate area thus formed, carved into the clear air by an implicit crescent, there is a complex fragrance woven of tobacco, powder, lipstick, rinsed hair, and that perhaps imaginary and certainly elusive scent that wool, whether in the lapels of a jacket or the nap of a sweater, seems to yield when the cloudless fall sky like the blue bell of a vacuum lifts toward itself the glad exhalations of all things.

This fragrance, so faint and flirtatious on those afternoon walks through the dry leaves, would be banked a thousandfold on the dark slop of the stadium when, Friday nights, we played football in the city.”

In our small town in Massachusetts, football games were played on Saturday afternoons. But the fragrances were identical – that curious combination of pipe and cigar smoke, perfume, the concession-stand hot dogs and the freshly-cut turf. The smells intensified as we sat pressed together on the hard wooden planks of the stands.

“…crushed together like flowers pressed to yield to the smoke, warmed wool, hot dogs, and the tang, both animal and metallic, of clean hair. In a hoarse olfactory shout, these odors ascended.”

“ Now I peek into windows and open doors and do not find that air of permission. It has fled the world. Girls walk by me carrying their invisible bouquets from fields still steeped in grace, and I look up in the manner of one who follows with his eyes the passage of a hearse, and remembers what pierces him.”

To read Updike well, you only have to know the telling title of his autobiography – Self Consciousness.

He experienced life somewhat removed from it. His mind soaking up the atmosphere – the sights, the smells, the emotional highs and slights. The obsessions and the fleeting nature of various passions.

The ending is as understandable as Eden. Another fragrant garden lost to our innocence.