1907’s highlights have to be coaxed from history books. Oklahoma became the 46th State of the Union and the RMS Lusitania made its maiden voyage from Liverpool to New York.

But a closer inspection draws a strong parallel to the economic collapse of 2008 and echoes the Gordon Gekko mantra “greed is good.”

Known as the 1907 Bankers’ Panic, the New York Stock Exchange fell close to 50% and a once robust banking system needed to be saved from catastrophe save by the machinations of the U.S. Treasury and bailouts by J.P. Morgan and John D. Rockefeller.

The panic also involved one particularly disgruntled and nervous depositor of the Knickerbocker Trust Company by the name of Samuel L. Clemens (Mark Twain).

Twain’s financial woes were legendary and he was fearful of losing his property and copyrights to creditors. His salvation came from an unlikely source – Henry H. Rogers, Vice President of Standard Oil and one of the 25 wealthiest Americans of all time.

Rogers was able to keep the creditors at bay and helped Twain manage his finances. Beginning with his mining days in Nevada, Clemens could not resist the lure of striking it rich – a legacy inherited from his father’s purchase of land in Tennessee.

Fred Kaplin in the Singular Mark Twain writes: ” In the late 1820s and early 1830s, John Marshall bought for about $400 approximately seventy thousand acres of land in Fentress County , south of Jamestown,

The soil was poor and the terrain hilly; access was limited to dirt paths. John Marshall, though, envisioned the press of heavy immigration one day making the land valuable. Apparently John Marshall expended with each purchase all the cash he had and bought again when he had accumulated more.

At his death, he put his hope in the future value of the land to his descendants. He died “house poor,” scraping for dollars, but his descendants, he expected, would be rich. His children lived, more or less, under his injunction never to sell. At different times the Tennessee land became for them, especially for Sam, a bitter joke, a psychological albatross, and an unheeded reminder of the destructiveness of unrealistic and uncontrollable dreams of wealth.

Clemens speculated on nearly everything that caught his fancy – from a milk product called Plasmon to, more infamously, the Paige Typesetter which hatched his financial ruin.”

It was on the recommendation of Henry Rogers that Twain had deposited most of his cash at the what was called the “white marble palace” the Knickerbocker Trust Company. 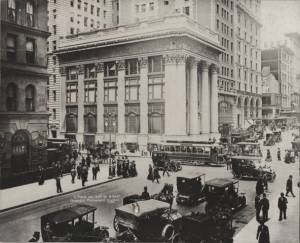 By 1907, the Knickerbocker reported nearly $65 million in deposits, making it the third largest trust company in New York City, with nearly 18,000 depositors.

Unfortunately, the President of the company, Charles T. Barney made a fateful decision to loan several million dollars of his depositors’ money to a group of Wall Street speculators trying to make a killing on inflated shares in a shady mining operation called the United Copper Company.

Once this information became public, the National Bank of Commerce announced that it would stop accepting checks for the Knickerbocker Trust Company triggering a run of depositors. 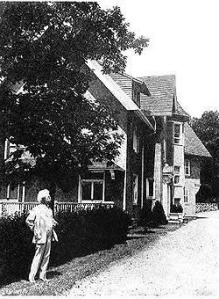 Twain was spending a few days in Tuxedo Park when he heard the news. He promptly telephoned his private secretary Isabel Lyon who was preparing his house on 21 Fifth Avenue – not far from the Knickerbocker.

She hurried to the trust company to withdraw his money as fast and was stunned by the sight that greeted her.

According to author Michael Shelden in Mark Twain: Man in White, “the streets were jammed with cabs, private automobiles, and “finely appointed carriages” belonging to Park Avenue widows and other wealthy depositors living nearby. With “bank books in their quivering hands”—as Lyon later put it—the crowd stood on the wide sidewalk and stared blankly at the Knickerbocker’s locked doors. Lyon had arrived too late. Police reserves, called in at the last minute, were standing at the entrance and were trying to hold back some of the depositors who were demanding to be let in.

Everyone was told the company had run out of cash and would be closed indefinitely. “Oh, it’s too dreadful,” Lyon wrote in her journal that night. “Every penny the King has, fifty-one thousand dollars, is in the Knickerbocker Trust Co. and … it has gone crashing into a terrible state.”

The panic spread, affecting many banks and trust companies in New York and elsewhere. Political leaders called for calm, and the secretary of the treasury came up from Washington to confer with worried financiers. There was no FDIC in those days, so the possibility was great that he would never see any of his savings again.

When Lyon saw him after her failed effort to retrieve his funds, she was surprised to find that he was holding up well. In fact, she thought he looked “brave and cheerful.” His relatively good mood also impressed Paine, who had come to believe that “the smaller things of life” often upset Twain more than the big problems.

While he had put cash to the Knickerbocker, his other investments in various securities were substantial, and some of them were under the safe management of Rogers’s office at the Standard Oil Building. However great his disappointment in the Knickerbocker, he knew that he could survive this setback.

The leaders of the effort to restore the financial system were J. P. Morgan and John D. Rockefeller, who raised millions from private and public sources to prop up dozens of beleaguered bank. In a matter of a few months the Knickerbocker was able not only to reopen but to resume payments to its depositors, including Twain.

Sheldon continues, “when asked by the New York World to reflect on his blessings at Thanksgiving, he used the opportunity to lash out at the trust company:

‘For years it has been a rule with me not to expose my gratitude in print on Thanksgiving Day, but I wish to break the rule now and pour out my thankfulness; for there is more of it than I can contain without straining myself. I am thankful—thankful beyond words—that I had only $51,000 on deposit in the Knickerbocker Trust, instead of a million; for if I had had a million in that bucket shop, I should be nineteen times as sorry as I am now.’

Twain seemed to bear the panic of 1907 better than his other financial misfortunes.  Age and the income he would be receiving for his autobiography softened the potential blow.